This was written for a university nonfiction workshop class.

If I were to tell you that there’s nothing worth going out of your way for located near the intersection of Van Dyke and 21 Mile Road, you wouldn’t have a hard time believing me.

After all, at a glance, this little area — and the streets near it — contain nothing but aging infrastructure and tiny strip malls filled with generic-looking small businesses. In some ways, it is but a purgatory that lies between the lively and bustling cities of Shelby and Utica.

However, if I were to tell you that, I couldn’t be more wrong. Because if you look near the intersection of Van Dyke and 21 Mile Road a little more closely, than you will notice a poster of a turtle plastered on the front of the window of a quaint building. “Dine In, Take Out,” the poster says.

The structure is tucked away at the end of a strip mall. And in sharp contrast to the other nearby strip malls and their barren asphalt pavement, you’ll have a hard time finding a parking space here.

In Michigan, it’s difficult to find restaurants that put forward true, authentic Mexican cuisine. This far north of the border, the best most Michiganders can hope for is high-quality Tex-Mex. It’s close in some ways to genuine Mexican, true, but it’s just not the same.

Las Tortugas Taqueria, though, changes that.

Ever since opening back in 2009 (two years before I even lived in the Shelby Township area!), this needle-in-a-haystack establishment has been serving customers top-notch foodstuffs with recipes taken directly from our neighbors to the south.

Day and night, the restaurant is jam-packed full of folks waiting to fill their stomachs; Mexican finger-food makes excellent lunches for the employees of the aforementioned nearby businesses, and Las Tortugas Taqueria’s huge selection of different meals and delicacies always draws in the crowds at dinnertime.

The eatery’s bread-and-butter, “ol’ reliable” speciality dish is their tacos, which consist of a meat of your choice, onions, and cilantro stuffed into a house-made corn tortilla, which can be served soft or fried depending on your preference.

It’s a simple recipe, but it’s far from bland — as it turns out, you don’t need a long list of components to make a satisfying meal when all of your ingredients are fresh and bursting with natural flavor.

Another home-run-hit for Las Tortugas Taqueria is their wet burrito dinner. To nobody’s surprise, meat of your choice, beans, and cheese tightly wrapped inside of another of the restaurant’s house-made tortillas, which is then topped with more melted cheese, and then finally drenched in the establishment’s tangy homemade sauce is a tried-and-true winner. Paired with the freshly-made Mexican rice and a large helping of refried beans — a Mexican staple — it’s a hard entrée to beat.

If you go in on the weekend, Las Tortugas Taqueria also has specialty soups that they offer specifically on Saturday-through-Sunday. “Consume de Chivo” consists of rich goat meat soaking in a concoction of onion, cilantro, lime, and its own broth, while “Menudo” trades the goat for lean, nutritious beef tripe. It is an acquired taste, but those who enjoy tripe will fall in love with the dish.

Since everything served at this Mexican hideaway is made of fresh ingredients and homemade components, it’s hard to pin down any one thing that makes Las Tortugas Taqueria’s menu stand out from the competition. However, at the end of the day, the ultimate secret behind the restaurant’s success is its variety of different meat options. Depending on what you feel like having, you can get any of Las Tortugas Taqueria’s dishes with both traditional Mexican proteins like chicken, pork, and goat, as well as with Tex-Mex offerings such as steak, ground beef, and shredded beef.

All of these meats are incredible. Out of all of the different choices, though, the marinated pork is the standout king; it has been known to literally explode with juices when customers go in for a bite.

Another contributing factor to this tortoise-themed joint’s fame is its pricing. The most expensive dish on the menu is only $14.99, and 90% of the food costs under ten dollars. You could walk into Las Tortugas Taqueria with a five-dollar bill and leave having eaten three full tacos, two quesadillas, or one full-sized large burrito, which is quite an incredible deal in today’s world where eating out only seems to get more expensive by the day.

The icing on the cake is the fact that Las Tortugas Taqueria has exceptional service. Over the course of the three years that I’ve eaten there, I’ve never had a rude server or an order come out slow. Quite the opposite, in fact — the waitresses have been nothing but exceptionally friendly to myself, my friends, and my family. In addition to that, the food comes out so fast that it still surprises me, even after all my frequent trips to the restaurant. And on the very off chance that it doesn’t, the servers are more than happy to provide you with as many baskets of freshly-fried tortilla chips and bowls of house-made salsa as you’d like until your order is finished.

One would think that the constant around-the-clock busyness would stress out the staff, but the pressure only seems to energize them further. And having your food handed to you at a record-setting pace and with a smile makes an already phenomenal experience even better.

But that isn’t where the good times end. 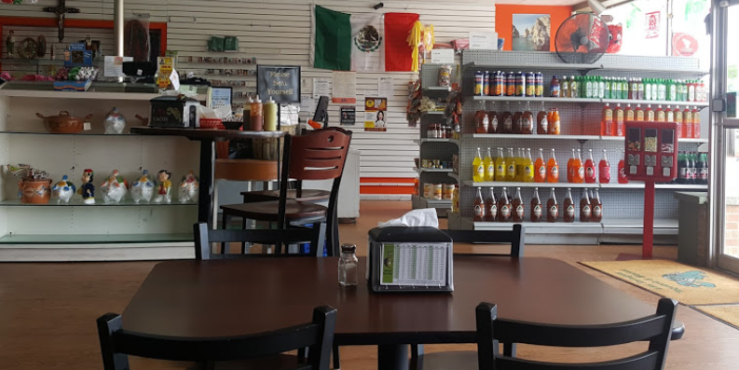 Las Tortugas Taqueria has one more ace up its sleeve in the form of a mini-market that customers can shop in before or after getting their food, which offers a wide array of authentic Mexican sodas, snacks, candies, ingredients, toys, and novelty items that you’ll have a hard time finding anywhere else in the state of Michigan. With these items, diners that have grown fond of the Mexican culture experienced through Las Tortugas Taqueria’s edibles can take it home with them and try to replicate it themselves — and the mini-market almost always has something new to check out every time you walk in.

So while the area near the intersection of Van Dyke and 21 Mile Road looks like nothing special at all, you should never forget to look for the turtle poster that’s plastered on the building tucked away at the end of a strip mall. Inside lies a treasure trove of genuine Mexican cuisine that’s made fresh every day and oozes authenticity, as well as a staff of exemplary people and aisles full of items ripped straight out of Mexican culture.

And if you can’t find a place to park? Just use one of the parking spaces in one of the adjacent strip malls. Don’t worry about taking up spots for the other buildings — it’s not like anyone is going anywhere else.